I’m lucky enough to live in a place with high, dry elevations where bugs and ticks aren’t really a problem – until this year. The weather has finally warmed up and our snow pack is starting to melt down the mountains. I do think the higher than normal snow pack we had this year is now creating a way wetter than normal environment for bugs to thrive in, much to my dismay.

Read on for my well-researched attack plan for bugs this summer. 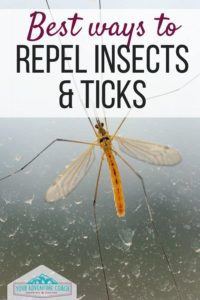 You could use DEET products, short for the chemical N,N-diethyl-meta-toluamide. While very effective, we all know it’s not the best idea to be spreading such harsh chemicals all over our skin (our biggest organ!) on a regular basis and it can also cause damage to our expensive, synthetic backpacking gear.

It also needs to be reapplied fairly often to keep working. If you’re one to get totally eaten alive – that might be worth it for you, though!

There was an interesting study done recently on why DEET actually works. It was previously thought that mosquitoes could smell the DEET and would be repelled, or possibly taste it on our skin and fly away instead. However, they now believe that mosquitoes actually sense/feel the DEET through the legs and feet and then are repelled off the skin. 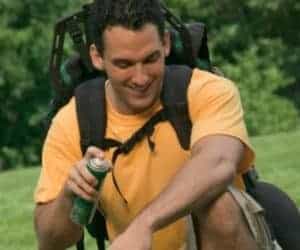 So, don’t be alarmed if mosquitoes still try to swarm you or even land on your skin, take notice if they’re actually biting you or just fly away to see if a DEET based repellent works for you.

Personally, I do try to avoid DEET as much as possible. So, here are our next best options, that can be just as effective…

Picaridin has been shown to be just as effective as DEET – hikers rejoice! I find that Picaridin based products don’t feel as gross on my skin and are generally considered safer to use than DEET, and it won’t dissolve your synthetic gear 😉

Picaridin is believed to work by actually blocking insects ability to sense you or identify you as prey.

You can give a 1-2 punch by using Permethrin on clothes, shoes, tent and packs and then use Picaridin based repellent on any exposed skin.

Permethrin is an insecticide and works by killing insects and ticks on contact. Just be sure to buy the kind specifically formulated for treating clothing, not the industrial strength Permethrin!

And be extra careful not to apply Permethrin around any pet cats, this is very harmful for cats as their bodies can not process it (much like the bugs it’s meant to kill!) Dogs are slightly more tolerant to Permethrin exposure than cats are, but still less tolerant than humans. So just be careful around your pets, that’s all I’m saying.

While I haven’t personally tested these yet, I’ve heard good things about Yellow Bird’s all natural insect repellent, especially as a safe option for kiddos.

Or you could make your own natural bug spray by adding oil of lemon eucalyptus to unscented lotion and lather up.

Another option is to simply cover up as much as possible, wearing long pants, long sleeved shirts, and a hat with a head net. I totally wear a head net sometimes if I’m getting those swarms of tiny gnats floating around my head and face during a long hike! 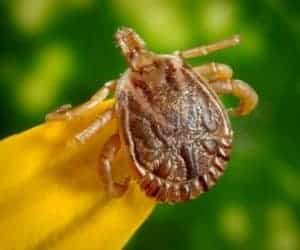 Besides taking steps to help prevent bites in the first place, always be sure to check your whole body for ticks each day after spending time in the great outdoors. You might want to carry a small mirror in your first aid kit for this.

Remove any embedded ticks with tweezers by pulling them firmly straight out and keep a close eye on the bite.

Go to a doctor or walk in clinic if you can’t remove the entire tick, like the head gets stuck in there, or if you any concerning reaction to the bite, like any rash or ring forming around the bite.

As a completely alternative option, I’ve seen thru hikers on the Appalachian Trail carry those battery operated electric bug zappers that look like a small tennis racket and they just walk along slowly swinging it zapping bugs by the hundreds! Haha! I don’t believe that is the most efficient insect repellent but it sure must be satisfying.

For more hiking safety tips, check out these posts: 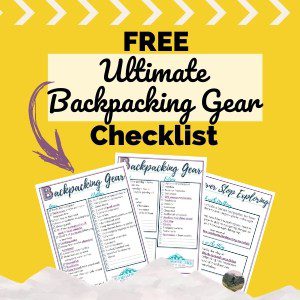